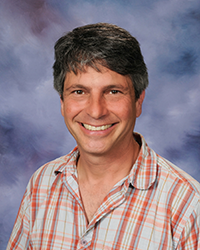 This is Bennett Brown's fifth year in the district where he has been teaching Applied Technology at Iowa City's SouthEast JH. He has a high school senior Alex, and his wife is a biology professor at the University of Iowa. Prior to joining the district in 2016, Mr. Brown was Director of Computer Science for Project Lead the Way and authored PLTW AP Computer Science Principles, adopted in over 3000 US high schools. Mr. Brown has taught online graduate courses in computer science education, and also taught elementary students through the UI Belin-Blank Center and the Chicago Public Schools. Mr. Brown taught physics, calculus, and engineering at Solon High School for over a decade. Bennett grew up in Iowa, with Jewish grandparents who fled the Russian pogroms. He has degrees in physics from MIT and the University of Iowa. He canoes, is an instrument player/singer/songwriter, speaks Spanish, and has two dogs. Email is his preferred method of contact, and he welcomes you to reach out and say hello!