Meet five Iowa City Community School District seniors who are prepared to excel in each of their unique pathways after graduation. Learn more about each student as they reflect on their time here, while looking toward the future. 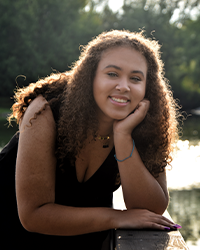 Kirsten wants to major in radiology or therapy because her mom had cancer and she was able to see how the people who worked around her mom always affected the way her mom felt that day.

“If I can be a little light to someone, even if it’s for five minutes, that’s a big thing of what I want to do, just be that positive in someone’s life,” said Kirsten.

Throughout her time at Liberty, many teachers and administrators have made an impact on Kirsten but Mayra Hoskyn, one of Liberty’s school counselors, has made the biggest impact. Mayra has helped provide support to Kirsten throughout high school and has never let her down.

“We learn what we need to learn from school books, but the teachers here and what they teach you about life is a big thing at Liberty,” said Kirsten.

Her favorite memory was joining SIIKED, a student group that focuses on discussing social issues and developing solutions for these issues within their school. She was able to be around more people who looked like her, taught her how to embrace her own identity, and helped her make lifelong friends.

After graduation, Kirsten is most excited about being on her own and being able to make her own decisions. 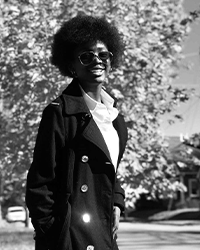 “I’m an active person. I don’t think having a job in an office is for me. I like to work out and do things. That’s basically what you have to do in the Navy. It’s challenging, and I like challenging,” said Noely.

After transferring to West High during her junior year, Noely immediately felt comfortable there. She found it easy to focus on school because the teachers kept her accountable. She also appreciated how caring the teachers were.

“It was easy for me to focus and get the work done. The teachers were so cool… If they feel like you’re distracted, they’ll sit with you and try to know what’s going on with you and how they can help you,” said Noely.

One of the teachers who made an impact on Noely was Hanan Rahmatallah, a math teacher. Noely liked Ms. Rahmatallah because she knew how to balance being nice and taking class time seriously.

“She is nice, but when it’s class time, she doesn’t care if she’s your favorite, it’s class time,” said Noely. “Sometimes I like strict people. I don’t like it when people are nice all the time, especially when it comes to something you need to be focused on.”

The U.S. Navy will also provide the structure and discipline that drives Noely.

“I’ll kind of be independent, but I won’t. There are rules everywhere and you have to respect that,” Noely said. “I guess I’m just more excited about living my life.”

Wyatt currently works for BWP Auctions in Iowa City. His role consists of helping set up, cataloging, and helping put stuff on the website. After graduation from Tate, Wyatt plans on continuing to work.

His favorite memory of high school has been all the people he’s met. He has found it easy to make friends at Tate.

Throughout his time at Tate High, math teacher Carrie Fitzgerald has made the biggest impact on Wyatt.

He is planning to take a few years off before going back to Kirkwood Community College for welding.

Wyatt first learned to weld while working with his dad, but he found his passion for welding by taking classes through the career academies at the Kirkwood Regional Center. The classes gave him a better perspective on his potential career paths after high school.

After graduation, Wyatt is most excited about having freedom and making more money. 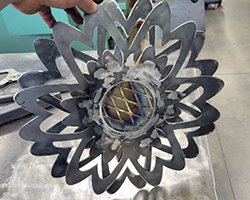 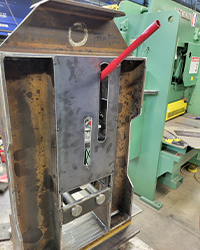 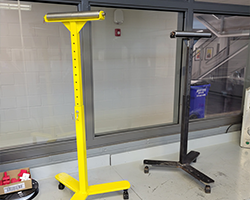 Elan Jenkins spent her senior year taking classes online. After graduation, she is going to Fordham University to study journalism with a minor in fashion studies.

This is Elan’s first year participating in the ICCSD Online program.

“It gives me a lot of freedom which is really nice so I have a little bit more time. It’s honestly just easier to get things done in some ways because you’re not restricted by the normal schedule,” said Elan.

“She has been awesome,” said Elan. “I can reach out to her about almost anything, and she writes back. She is so nice and so supportive, and I honestly don’t think I could have got through this year without her.”

The online program has also helped Elan learn better communication skills. She thinks it’s important to learn how to advocate for yourself.

“You have to reach out and go out of your comfort zone to write to teachers about a grade or something or ask a question, and if you don’t know how to do that, then that can be scary,” said Elan. “[ICCSD Online] taught me how to do that.”

After graduation, Elan is excited to go to college, experience New York, and meet new people. 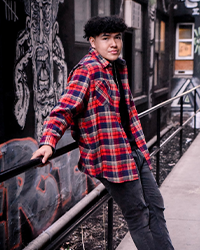 Ricardo Marcelino is a first-generation college student and athlete in his family and is planning to attend Augustana College to play football and major in civil engineering.

“It feels kinda nice knowing that I’m the first to attend a university,” said Ricardo. “At times, it’s sometimes nerve-racking, but at most times it’s very exciting.”

His experience at City High helped Ricardo learn what subjects he was passionate about and prepared him for life as a student-athlete after high school.

“The education at City High has played a big role,” said Ricardo. “It has made me see what I like and what I don’t like. Also, it shapes you as a student and gets you prepared for what’s to come.”

Throughout his time at City High, two of the most influential people were Dan Sabers and Mitchell Moore, both football coaches.

“Coach Sabers taught me how important it is to have a good work ethic,” said Ricardo.

“Coach Moore has had a big impact on me as well,” said Ricardo. “Not only is he one of the best coaches I’ve had, but also is a really genuine person. He helped me throughout the recruiting process and answered all the questions I had.”

After graduation, Ricardo is most excited about the new opportunities that he will have.